Electric generators that are used within nuclear power plants are powered much like the way you power a bicycle with your legs, but on a much larger scale. The difference is that, instead of someone pedaling furiously with their legs, heavy steam drives the big generators. A nuclear reaction creates the steam by burning the fuel. A nuclear power plant produces a huge amount of electricity, but much of it is lost through producing the energy. That energy goes from the nuclear plant to the factories, homes, and businesses by traveling many miles through cables, losing up to two thirds of the original power it originally created while in motion.

The power plants create the electricity through burning things such as oil, gas, and coal, also known as fossil fuels, which causes some extra problems. Global warming is said to be caused by the contamination created through burning those fuels. There is also the problem that fossil fuels can run out and are often restricted. 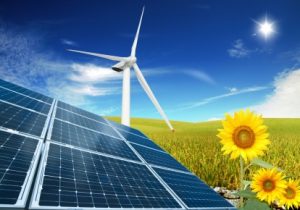 Luckily, there are a lot of other ways that energy can be made that do not cause global warming, are a lot more efficient, and that do not pollute like using fossil fuels does. Since these types of energy can last forever, they are considered renewable. Solar power and wind turbines are two forms of renewable energy. They are a very reliable source for creating electricity. Less power is wasted as well since less travel is needed for the electricity to travel down wires due to the fact that they can be mounted closer to the place where they are needed.

A wind turbine is made using a very simple generator that has a propeller on the front. The generator turns when the wind blows it which, in turn, creates electricity.

The batteries used in solar energy do not work through using generators or magnets, making it unlike any of the other methods used for creating electricity. Instead, the the sun hits the solar cell, the silicon material gathers the power from the sun and directly turns it into electricity. This makes solar power a very reliable means for creating electricity for homes and businesses. Places with solar panels mounted on their roofing are able to produce the majority of their own electricity if they are done correctly.